How To Answer Why Did You Leave Your Last Job? 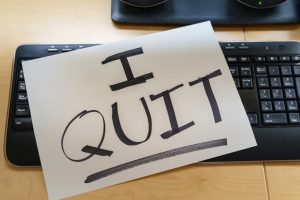 My advice on this question, if it’s not a conventional reason, like, a need for more responsibility, you were vetted, or experienced a lay-off… do not lie about “why”. However, you don’t have to tell the whole truth either. There are two sides to every story. And unless you are a chronic quitter or have an anger-management issue that needs professional counsel – let’s assume the incident is not the sum of all your parts. In other words – the unfortunate situation is not an overall character flaw that reflects who you are as a human or your productivity and ability to do the job. That’s what the interviewer is worried about – your answer will tell them what they need to know. Your response to this question will either ease their worry or substantiate their concern.

So, how do you tell the truth when you’ve been fired regarding performance, you had it out with your boss or you quit a job you just started? It’s all in how you organize and prepare your explanation.

Keep your response neutral. Remove any emotion behind your explanation. Keep it short and word the situation tactfully. You don’t have to fully disclose or divulge. Interviewers understand life happens; you quit, yes, you got fired. However, don’t shoot yourself in the foot by unconsciously carrying residual guilt or emotion from the experience into your answer.

The real reason you left: Your new boss was crazy and you couldn’t stay.

A well-prepared response: “During my time at ________, I was lucky to have had the same Supervisor. The team that was built under her supervision and guidance was strong, it was built on trust and support. My supervisor’s replacement had less experience and a very different style, something the whole team felt. My responsibilities were modified and the role I had professionally grown into changed dramatically.”

The real reason you left: You lost an important account and client – you made a wrong call and were terminated.

A well-prepared response: “I am proud of what I have accomplished in my 10 years at __________ and my repeated success of meeting deadlines on go-lives and launches as a Sr. Consultant.”

Then, give a short description of the project. After that, state the impetus that led to the departure; difficult client, conflict, etc. Give supporting evidence in your favor; Were your hands tied? Was there a moral issue?  Was the client difficult to work with and were there others that also had difficulties with this client? Neutrally state your misstep, for example, “An error of judgment on my part.” Try to sum the emotion behind your action with a neutral phrase.

The real reason you left: You’ve only been at your job for three months and the people are weird, the place is a mess or you just don’t like it.

A well-prepared response: “There was a misrepresentation of how the position and it’s responsibilities were communicated in the interview compared to the actual functions of the job.” First state, (if applicable), that you pride yourself on your loyalty and commitment to your employers, as your history illustrates. This was just not a fit and you felt both you and the employer would benefit by you leaving sooner than later.

Interviews are all about presenting yourself and skills positively. When the interviewer asks a question that conflicts with the image you are trying to convey, it’s awkward and can feel risky. However, as stated above, sometimes things just happen. Not as we planned, or wanted. Interviewers are looking for vulnerability and true insight. Working with an Interview Coach is really your best bet to feel most prepared and comfortable when answering this question.